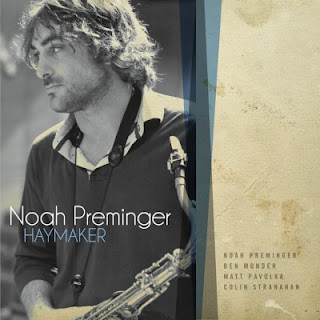 Haymaker begins with “Morgantown” (6:26), whose theme is built out of drawn-out notes, with Stranahan spicing things up with simmering background drumming.  After playing the theme, the group moves into a mid-tempo groove, and Preminger plays a solo that demonstrates his wide-ranging, unpredictable style, alternating fast, wild runs up and down the horn with wide interval jumps and leaps into the altissimo.  Preminger’s tone is distinctive: strong but paper dry and woody (a bit like Joe Lovano in this regard).  He gets pretty, sensitive accompaniment from Monder.  After the tenor solo, Stranahan gets the spotlight, but his solo is fairly reserved compared to his effervescent background playing.

“My Blues for You” (6:03) is a slow, simple song with a vague waltz feel.  Preminger plays a relaxed, bluesy solo, again mixing in some wild runs.  Monder then plays a smart solo, employing slight, pungent reverb in his tone, playing variations on his phrases and adding in some humorous plucking.  (It’s nice to be reminded that contemporary jazz improvisers are capable of displaying a sense of humor in their improvising.)

“Haymaker” (6:01) is a straightforward, mid-tempo tune, again featuring energetic background playing from Stranahan and another smart, capricious solo from Preminger.

“Animal Planet” (8:24) has a gentle, folk-ish theme with an elusive meter, which Preminger plays while Monder picks an attractive background.  Monder then plays a lyrical, Metheny-ish solo without reverb.  Preminger then adds his own lyrical solo, including some impressive, intricate lines, with fine accompaniment from the trio of rhythm players.

Preminger then offers a pleasant change of pace with “Tomorrow” (3:10), from the musical “Annie”--a slow, pretty reading free of improvisation (except for a few flashy runs from Preminger).  We get to focus on Preminger’s idiosyncratic tone; his sub-tone is especially interesting, buzzy like a cicada.

“15,000” (7:54) is another cut with a theme composed of longish tones and enlivened with Stranahan’s peppy background playing.  The cut moves into a brisk 6/8, and Preminger plays a slightly off-center solo.  Monder shows off his skill and wit again by picking up the last phrase of Preminger’s solo and imaginatively toying with it, employing a slightly distorted tone.  Stranahan lets loose for a while before Preminger repeats the theme and the cut ends.

“Stir My Soul” (4:54) has a gentle and lyrical mid-tempo theme.  Pavolka plays a folksy, understated solo, and Preminger briefly solos, again in his slightly wild style, after which he repeats the theme and Monder ends the cut with a shimmering chord.

The first part of “Rhona’s Suite” (7:27) is an out-of-tempo tone poem played in unison by Preminger and Monder.  After some mid-tempo, loose improvising by Preminger, the first part of the suite ends.  The second part begins with some casual playing by Monder, and then Preminger and the guitarist play a slow, out-of-tempo melody in unison, again with energetic, against-the-grain accompaniment from Stranahan, after which the cut ends quietly.  Lacking a unifying theme, groove, or harmonic structure, this cut comes off as a bit aimless.

“Don’t Drink the Water” (5:24) has a quiet, slow, out-of-tempo beginning that develops into a mid-tempo rock beat with a pretty theme.  Monder then plays some muscular, distorted rock guitar in tandem with some lower-key improvising from Preminger.  The saxophonist then repeats the theme for a straightforward close to the cut.

The recording ends with a brief coda, “Motif Attractif” (1:50), a quiet duet between Preminger and Monder.  The two play a simple, slow melody in unison, with Monder adding dreamy chords for accompaniment.

On Haymaker, Preminger shows himself to be a self-assured and skillful improviser on the tenor sax with an unusual but effective tone and a distinctive improvisational style, something like a jazz analogue of a “drunken” martial arts style, with surprising twists and turns and an apparent lack of structure that still manages to be melodic and accessible.  Monder consistently acquits himself as a brilliant accompanist and improviser.  Overall, Haymaker is a serious, straightforward addition to the jazz corpus, livelier than Preminger’s darker, previous recording, Before the Rain, and it leaves one looking forward to what he conjures up next.
Posted by Paul Hrycaj at 10:41 AM