Hey, gang, I'm passing on this invitation from Howard Mandel, President of the Jazz Journalists Association, for those folks who will be in the NYC area on April 30th, International Jazz Day:

It's just one week until International Jazz Day and we want to invite you to the special Jazz Day event the Jazz Journalists Association is co-hosting that day, April 30, with the Louis Armstrong House Museum in Queens, New York. This event is free and open to all. If you can't make it, please tell your friends. (We know some of you aren't in the area, but just in case you might be nearby on April 30, we want to make sure all our friends get an invitation. And please read on for information on some celebrations in other areas.)

We've got some wonderful things planned for the Louis Armstrong House/JJA celebration:


This free and open-to-all event starts at
2pm on Tues April 30
and will be held at the
The Langston Hughes Community Library and Cultural Center
10001 Northern Boulevard, Corona (Queens) NY 11368
(The Center is just a short walk from the Junction Boulevard or 103rd St. Corona Plaza stops on the 7 Subway line.)
The newly-unearthed Armstrong recordings were made at a 1961 performance at Freedomland, a fabled although short-lived Bronx amusement park. They were recently donated to the Museum by the son of Freedomland sound engineer Peter Denis. They have never been circulated or issued, and are not listed in jazz discographies. (More information about the recordings and presentation.)
Following the presentation, the Jazz Journalists Association and Armstrong House Museum will toast Louis Armstrong at a special soul food reception to mark the finale of the JJA's JazzApril media campaign in support of Jazz Appreciation Month and International Jazz Day.
We really hope you can make it, it's shaping up to be a wonderful event. If you plan to come please RSVP by calling the Louis Armstrong House Museum at 718-478-8274.
Posted by Paul Hrycaj at 2:39 PM No comments: 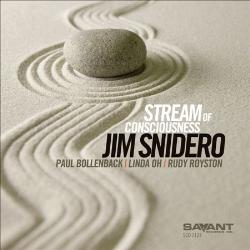 Stream of Consciousness starts with the title tune, a simple, upper mid-tempo, modal composition along the lines of “Impressions.”  Snidero takes the first solo, displaying a dry, airy tone, somewhat along the lines of David Binney, though his phrasing is more traditional and straightforward.  Snidero plays his solo with only bass and drums for accompaniment, employing bursts of clipped and horizontal phrases, following the chord changes faithfully.  Bollenback comes back in for his solo, which is very good, a nice mix of fleet lines and chords.  Royston finishes the solos with one that is intense but melodic.

“Nirvana” has a light, elusive melody taken at a relaxed mid-tempo, played almost like a ballad.  Snidero plays an understated, graceful solo, and Bollenback plays an engaging solo on what sounds like a classical guitar.  (The only other time I’ve heard Bollenback is with Gary Thomas, and he almost exclusively used distorted electric guitar in that context, so hearing him play acoustic guitar so well is a treat.)

“Fear One” is an up-tempo tune on which Oh lays out.  Snidero plays a skillful solo, one fast line after another, but one that doesn’t have much development.  Royston gets in a good solo, rumbling all over the drum set.  The tune is a bit unsubstantial, unfortunately, and doesn’t give the musicians much to work with; they probably should have included the bass to give the cut some gravity and more drive.

“Black Ice” is a fun, mid-tempo tune with a slightly funky groove, with Snidero and Bollenback in unison on the funky melody.  Snidero plays a light-hearted, disjointed solo.  Bollenback plays a clever, reverb-y solo that is too brief.  Oh adds a lyrical, horn-like bass solo.

“Wisdom’s Path” is a lower mid-tempo jazz waltz (which reminds me a bit of Gerry Mulligan’s “Walk on the Water,” on Mulligan’s wonderful big-band recording of the same name.)  Snidero seems to favor pretty jazz waltzes; “Beatrice” on Storm Rising and “Twilight Waltz” on Standards Plus come to mind.  Bollenback is on classical guitar again, and plays a shimmering, Spanish-tinged solo, Royston providing cool, swinging support behind him.  Snidero seems more relaxed and engaged in his solo on this cut, showing off his textbook jazz articulation.  Oh plays a fine solo, too.

“K-Town” is another modal tune, with a dissonant melody taken at mid-tempo, again sounding a bit like “Impressions.”  Snidero improvises well, with a bit more fire and edge than usual, but the unvarying rhythm of the cut gets monotonous; the tune could have really used a bridge.  Bollenback has lots of interesting things going on in his solo; he accomplishes a lot in a small space of time.  Near the end of the cut, Snidero lets loose a bit, with some wilder playing and altissimo screaming; I wish he had employed a bit more of this emotion in some of his other solos to add some spice.

I have mixed feelings about Snidero’s work on this recording; while he has a good sound, good ideas, and beautiful jazz articulation, his solos don’t have much development and come off as a bit cold.  The tunes on this recording are a bit lackluster, as well.  The star of the show is Bollenback, whose solos, on both electric and acoustic guitars, consistently display logical development, clever ideas, and emotional engagement.  Overall, Snidero displays solid and accomplished alto sax playing on Stream of Consciousness, but, in my view, he could have used something to fire up his somewhat emotionally detached improvising.
Posted by Paul Hrycaj at 2:59 PM 2 comments: 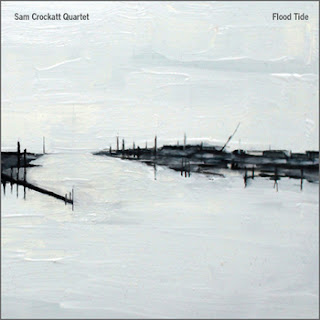 Personnel: Sam Crockatt: tenor saxophone; Kit Downes: piano; Oli Hayhurst: bass; Ben Reynolds: drums.
Flood Tide starts out with “Sun & Moon,” an upper mid-tempo tune with a Keith Jarrett-ish, jaunty melody, somewhat like “The Wind-Up” from Jarrett’s Belonging album.  Crockatt plays a light-hearted, exploratory solo with just bass and drums for accompaniment, playing with a sound and style combining elements of Joe Lovano and Joe Henderson.  Then Downes comes in, also playing in Keith Jarrett style, with spiraling phrases that double-back on each other and impressive technical flourishes.
“Trilogy” is a piece with, not surprisingly, three distinct parts.  The first begins as a slow duet between Crockatt and Hayhurst, something like a pretty Scottish folk song, Crockatt’s tone full but gentle; eventually Reynolds plays accompaniment and Downes joins Crockatt on the melody.  The second part is a quiet, delicate duet in ¾ time between Crockatt and Downes, though when Reynolds and Hayhurst join in it becomes like a slow, melancholy dance.  The second part smoothly flows into the last part, which just ups the intensity briefly before closing out.  This is a lovely piece of music, but there is no improvisation involved.
“The Golden Goose” picks up the tempo a bit with a light, intricate theme played by Crockatt and Downes that moves into a melodic, focused bass solo, Downes active in the background but Reynolds just barely touching the drums.  Crockett then cobbles together a fine solo, building each phrase from the previous one.  The cut ends in a dramatic and pleasing fashion, Crockatt working a series of ascending phrases into a climax.
“King Apple” has a bluesy, Monk-like melody taken at mid-tempo.  The piano lays out on this cut and the trio sounds similar to Joe Henderson’s State of the Tenor recording, Crockatt playing a relaxed, patient solo.
“The Ridgeway” is a mid-tempo tune that starts with a repeated bass figure and whose melody is like a prettified, slower “Freedom Jazz Dance.”  Eventually, the cut moves into a somewhat funky groove and an ostinato over which Downes plays a solo that brings the word “groovy” to mind.  Crockatt then plays a funky but well-controlled solo.  The cut fades out on Crockatt’s playing.
“The Prophet” has a quiet, measured, free-form opening, Crockatt playing a slow, snaking line that develops into an appealing melody with a slightly Middle Eastern feel.  This cut also dispenses with improvisation (except for Reynolds’s dynamic, meterless accompaniment).
“Theodore’s Spring Song” is a mid-tempo tune with a coy, elusive melody.  Crockatt plays a brief, disjointed solo, and Downes picks up this vibe in his solo as well, with minimalist accompaniment from Reynolds.  Then Hayhurst has his solo turn, after which sax and piano return for some free-form improvisation and a brief return to the melody to close the cut.
“Flood Tide” is a pretty, lyrical song, taken at a lower mid tempo.  The tempo eventually picks up and Downes solos, sounding very Keith Jarrett-ish again, playing all single-note, right-hand lines.  Crockett gets in a solid solo, one of his lengthier ones of the recording.
Flood Tide is a collection of appealing music, apparently inspired by Keith Jarrett’s European Quartet, but so laid-back and low key that it doesn’t leave a deep impression.  The players all seem committed to producing a cohesive whole without anyone grabbing a lot of individual attention.  The project has something of a 60’s, Bohemian feel, uncommitted to the theme-solos-theme format but still strongly connected to the jazz tradition.  Crockatt plays the tenor sax with a woody, full sound, a bit like Joe Lovano, but with a more deliberate, patient approach to phrasing, concerned with getting every note just right, and with little use of the altissimo range.  The group could stand to take more chances, particularly in their soloing, though everyone is very solid in that department.  Based on Flood Tide, Crockatt and his quartet deserve to be watched closely for future developments.
Posted by Paul Hrycaj at 6:53 AM No comments: