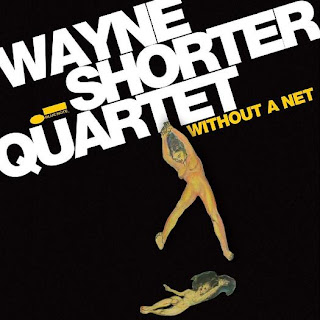 Shorter begins Without a Net (his first recording in around 8 years) with “Orbits.”  The beginning of the cut starts with an ominous, low-register, four-note piano pattern, and Shorter freely improvises over it on soprano sax.  Then the group develops a groove, still centered on the original four-note pattern, Perez providing most of the glue, Shorter improvising at will over the rest of the group.  This cut never gets too far off the ground, but it still works pretty well.

Starry Night” starts with some out-of-tempo playing from the rhythm players, with the focus on Perez.  Shorter enters the proceedings on tenor, eventually playing soft, ephemeral phrases behind Perez’s soloing, his tone as dry as paper.  Shorter eventually becomes more assertive, and he and Perez improvise in tandem.  After a brief piano interlude, Shorter switches over to soprano sax, and Blade gets wilder and Perez more percussive as the piece reaches its climax.  The intensity abruptly falls off, and Perez and Shorter play a brief closing.

“Golden Mean” begins with a brisk chord figure from Perez and with Shorter on soprano, quoting a line from “Manteca.”  Shorter gets in some excellent soprano sax playing here over the sharp, upper mid-tempo groove.  Perez, Shorter, and Patitucci then spend some quality time improvising together.  Then Perez takes the spotlight with Shorter playing along with him.  The playing quiets down briefly and the piece comes to an end.

“Playa Real” has a bit more cohesion as a regular tune, a pretty one at that, with nice underpinning from Perez and a solid, mid-tempo groove.  Perez plays a repeated figure while Shorter wails away on soprano sax.  After some straightforward figures from Perez with Shorter taking a break, he comes back in for some more spirited improvising before the piece comes to a close.

“Myrrh” begins with some slow, tentative playing by the quartet.  The tempo remains slow, but it becomes heavier and more intense, Shorter playing some strong phrases on soprano.  This is a pretty short cut, at around 3:00, and it never really goes anywhere; it’s the recording’s weakest cut.


The recording takes a significant turn with “Pegasus,” a 23-minute piece that features the playing of the Imani Winds, a woodwind quintet.  The cut begins with a brief intro on piano, and then the winds basically take over with some slow, modernistic, dense orchestration.  Part of the piece is an orchestration of the opening of Shorter’s “Witch Hunt,” a nice line that works well in this context.  The music at this point sounds like modern dance or ballet music.  Then the jazz players make a splashy entrance.  At about 6 minutes in, Shorter starts improvising on soprano sax, accompanied by spurts of percussive phrases from the winds.  Perez takes the spotlight for a while as the winds lay out.  Shorter comes in again, beginning his improvising by quoting “Straight, No Chaser,” the winds again providing a disjointed background.  Then the winds lay out and the rhythm players take center stage for a while.  Shorter returns and begins a long and aggressive solo over repeated, heavy chords from Perez.  The final section of the piece starts with a marching fanfare with all the players, then things begin to quiet down to a clean end.

“Flying Down to Rio” begins with a strolling chordal passage from Perez, with Shorter adding a little whistling.  Perez’s pattern sounds vaguely oriental, and a bit like the piano background in Billy Joel’s “Zanzibar,” while Shorter plays a slow, gentle melody on soprano.  Eventually Perez plays a heavy, slow chord pattern over which Shorter passionately solos.  Then Perez solos in an out-of-tempo section, with splashy accompaniment from Blade.  Shorter returns with more aggressive improvising, and the cut just seems to run out of steam.  The more conventional melody of this cut gives the group a nice anchor to work around, but it gets a bit aimless at the end and probably goes on too long.

“Zero Gravity” begins with a bit of Shorter’s whistling, with Patitucci providing a dancing line on bass for background.  Perez comes in with a vaguely Indian sounding background.  Patitucci sounds particularly good here.  Shorter adds some loose and intermittent but lyrical improvising on tenor sax, the rhythm players keeping things at a low simmer.  Then Perez gets into a long, Chick Corea-ish piano solo; this is some of his best playing on the recording.  Shorter returns briefly to make a strong melodic statement.  Blade then solos briefly over a repeated figure from Perez, then the cut trails off on Perez’s playing.

Perez is the focus of “UFO,” playing a series of continuous, flowing lines and arpeggios.  The rest of the quartet provides disjointed, out-of-tempo accompaniment, Shorter adding some aggressive lines on tenor.  The up-in-the-air quality of this piece gives an appropriately unsettled ending to the recording.

The general approach on Without a Net is fairly unstructured, let’s-see-what-happens group interaction, which is somewhat hit-or-miss, though mainly successful, and it hangs together as much as it does because of the virtuosity, integrity, and experience of the players, especially Perez.  Personally, I find this intensely interactive music less cohesive and satisfying than that of, for example, Keith Jarrett’s European quartet, but some might prefer the exhilaration of experiencing great musicians working with very little structure.  The exception to the generally loose approach here is the highly composed “Pegasus,” which is excellent on its own but kind of sticks out like a sore thumb in the context of the rest of the recording.  For his part, Shorter, at nearly 80, is still playing extremely well, producing pure, almost classical-sounding tones on his saxophones and kinetic, generous improvisiations.  Overall, Without a Net is thoughtful and serious improvisation-based music, and it is important as a chronicle of the recent activity of one of the most imposing, and still vital, figures in the world of jazz.
Posted by Paul Hrycaj at 9:26 AM