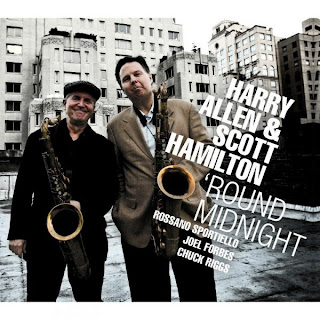 Allen and Hamilton are tenor saxophonists firmly rooted in the swing tradition of Ben Webster, Lester Young, and Zoot Sims, and they are content to remain in this style without altering or expanding it.  To my knowledge, there aren’t many players these days espousing this style, or at least not as well and as deeply as these two guys.  The recording starts out with the old chestnut, “My Melancholy Baby.”  Allen and Hamilton show themselves to have similar sounds on their instruments and similar playing styles.  But closer listening indicates that Allen is a bit more playful and adventurous in his phrasing, while Hamilton is more restrained and romantic, and his tone is smoother, almost velvety.  After solos from Allen and Hamilton, pianist Rossano Sportiello solos well in a (to my ear) Tommy Flanagan style—pleasant, but without fireworks or significant variety.  Allen and Hamilton trade fours for a chorus before playing the melody to a close.  This tune introduces the recording pretty well but is a bit on the schmaltzy side; these guys deserve better.

“Great Scott,” written by Allen, I think, is a fun, upper mid-tempo, blowing tune.  (“Donna Lee” changes, perhaps.)  The script is pretty shopworn: the saxophonists each take a solo, then there’s a piano solo, then the saxophonists trade fours and state the melody to close out the cut.  “How Am I to Know,” an old tune by Jack King, taken at a strolling mid-tempo, starts with a harmonized statement of the melody, then a Sportiello solo, then Hamilton takes over.  Hamilton’s laid-back style really shines here, and he produces a solo that’s like a polished gem.  Allen then comes in, first trying to match Hamilton’s elegance, then building up to some fast lines and growling phrases.  Bassist Joel Forbes plays a pretty solo.  This cut has the best work from the saxophonists so far.

Bill Potts’s “The Opener” is an upper mid-tempo tune with the players following the usual script, Hamilton very fluid and Allen strongly swinging, though this time Hamilton and Allen trade fours near the end of the tune with drummer Chuck Riggs.  Next up is “Baubles, Bangles and Beads.”  This tune is played as a lower mid-tempo bossa nova.  Allen and Hamilton start off the tune by trading eight-bar phrases of the melody, as opposed to their usual approach of playing of a tune’s melody in unison or in harmony, and this is a really nice effect, like a conversation.  Then something unusual happens: Allen, throughout his solo, does an uncanny imitation of Stan Getz, using slippery, swooping, Getz-like phrases and even affecting a more hollow, Getz-ian tone.  Hamilton is having none of this hocus-pocus; his solo is pure Scott Hamilton.  Not to be outdone, though, he produces one of his finest solos of the recording, at his romantic best on a romantic tune.


Next up is “Hey Lock,” a mid-tempo, rock solid, straight-up swinger (written by Eddie Lockjaw Davis, I think), with the group in their usual “Allen, Hamilton, Sportiello, saxes trade fours” routine.  The group then plays the standard “Lover,” up-tempo, with the saxes nicely harmonizing the melody.  Hamilton begins the improvising with a couple of slick, fluid choruses, and Allen follows with a fairly dazzling solo of his own.  Sportiello then plays a good solo, more harmonically adventurous than usual.  More trading fours by the saxes before Riggs gets in a few fills.  “Flight of the Foo Birds” is next, an upper mid-tempo swinger with a pretty melody written by Neal Hefti.
The recording ends with Monk’s “’Round Midnight,” and Allen and Hamilton do a beautiful job of reading the melody, again trading eight bars as they did with “Baubles,”  taking the AABA tune and trading sections, Allen-A, Hamilton-A, Allen-B, Hamilton-A.  Then they repeat this approach in their improvising.  Allen improvises well, gliding through the changes.  Hamilton’s playing here is on a slightly higher level.  It’s very exposed, stripped down to the barest essentials.  Though Allen’s playing is fine, I wish this cut were all Hamilton.  His playing here is so simple and pure, so attuned to the song, it’s iridescent.
Overall, ’Round Midnight is a fine recording (solid soloing in swing style, solid and sympathetic rhythm section) with occasional stretches of brilliant playing.  Allen and Hamilton always play well—it’s impossible for them to play a bad note--but sometimes they go beyond being “swing” players and take the music to a different level.  I think this is at least partly a result of how they respond to their material.  On this recording, they are especially good on “How Am I to Know,” “Baubles, Bangles, and Beads,” “Lover,” and “’Round Midnight”; I think these tunes are stronger than the others and that Allen and Hamilton respond accordingly.  If they could put together a full recording of material of this caliber, it would be dynamite.
Posted by Paul Hrycaj at 9:32 AM