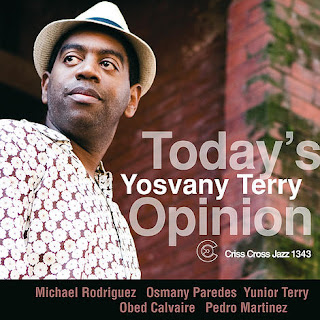 The first cut on the recording, “Summer Relief,” starts off with some guy talking/chanting/singing in a language I don’t recognize (an African language, I think), joined briefly by a male chorus of singers.  Then the horns (Yosvany Terry on alto and Michael Rodgriquez on trumpet) come in and play a hip, sophisticated upper mid-tempo melody, something Woody Shaw might have written.  Yosvany starts off the solos (I call him by his first name to distinguish him from his bassist brother, Yunior), his alto sound solid and clear (though a bit “smallish”) throughout the range of the horn.  His phrasing is pretty much in the post-bop tradition, but his fertile imagination prevents him from falling into cliché.  He’s followed by Rodriguez, who plays a musical solo that’s all over the full range of the trumpet.  It’s great to hear him again after his excellent but too-brief appearance on the Dayna Stepens’s Today is Tomorrow (previously reviewed here).  Drummer Obed Calvaire has a good solo over an ostinato by pianist Osmany Paredes.  Then Yosvany and Rodriguez trade fours for a while, pushing each other to hotter and hotter places.  Then they cool things down, the voices briefly return in the background, and the tune fades out.
Paredes introduces “Contrapuntistico” with some slow, lyrical playing by himself.  Then the alto and trumpet come in on a pretty, upper mid-tempo melody in unison, with Calvaire propelling things along.  Yosvany starts out with a good solo, with straightforward lines that regularly break out into flurries of notes.  Then Paredes plays a very Chick Corea-ish solo.  The tune has a false ending, the group then moving into a more free-form section over an ostinato from Paredes, with ferocious drumming from Calvaire.  Yosvany and Rodriguez again trade fours for a bit and then repeat the closing theme a few times to close out the cut.  “Inner Speech” has a clever, mid-tempo melody, sounding like something Chick Corea might have written in his “Inner Space” days (coincidence?).  The rhythm section lays down a nice groove for Yosvany, and he takes advantage of it by playing a laid back, thoughtful solo with quite a bit of space between phrases, possessing a nice vocal quality.  Rodriguez follows with a thoughtful solo of his own but with a bit more fire, his swaggering phrases occasionally swooping into the high register.  From beginning to end, this tune is just straightforward jazz, beautifully executed.
“Returning Home” slows things down a bit to a loose mid-tempo, Yunior insistently repeating a single note, Calvaire quietly intense in the background.  Yosvany plays soprano sax here (the only time on the recording), and Rodriguez lays out.  Paredes plays a fine solo.  Yosvany then solos, basically transferring his alto playing style to the soprano, though he uses a more prominent vibrato on the higher-pitched instrument.  “Harlem Matinee” is another upper mid-tempo tune, with an imaginative melody that has a sophisticated, urban feel .  Yosvany and Rodriquez play the melody in unison, Calvaire quietly simmering behind them.  Rodriguez, Yosvany, and Paredes all play strong solos, and the tune fades out on Paredes’s playing.
“Suzanne” is the only tune on the recording not penned by Yosvany, having been composed by Yunior.  The melody is broken into two parts, an aggressive, jangly opening section that gives way to a smooth groove.  Yosvany plays a good solo, though he doesn’t sound as comfortable as he usually does, and he’s followed by some musical improvising by Yunior on bass.  To my ear, this tune is not as interesting as Yosvany’s tunes, and the performance overall is comparatively pedestrian.  “Another Version of Oji” starts with some free form, out of tempo playing from Yosvany and Rodriguez, and then moves into a slow, snaking melody.  Rodriquez plays a probing solo against minimalist backing from the rhythm section.  Yosvany takes over with a probing solo of his own that shows a lot of variety; he doesn’t stay in one train of thought for very long.
“Son Contemporaneo” starts with a dramatic repeated line from Paredes, which then moves into a lightning-quick line played by Yosvany and Rodriguez in unison.  (This reminds me of Chick Corea, too.)  The tune then goes into a slower section, and Yosvany digs into a long solo.  During Yosvany’s playing, a keyboardist plays some spacy background stuff--Gonzalo Rubalcaba, I think (as implied by the Criss Cross notes), which doesn’t really add anything.  Rodriguez and Paredes then improvise together, to good effect.  Yosvany and Rodriguez then play the fast melody again to the end.
“Today’s Opinion” is, to my ear, a mixed success.  Yosvany Terry proves himself to be a top-notch alto saxophone player.  He has a terrific command of the horn, bottom to top, with a good sound, and he uses these tools to express his seemingly endless musical imagination, though his phrasing style remains firmly rooted in the post-bop tradition.  His composing is also uniformly excellent, producing ear-catching melodies and a variety of backgrounds and textures within tunes; the weakest moments on the recording come on “Suzanne,” the only tune Yosvany didn’t write.  The tune selection is a bit odd though, since most of the tunes are pretty traditional post-bop, but the last tune, “Son Contemporaneo,” sounds more modernistic and somewhat out of place; the recording would have made more musical sense to end with a more typical Yosvany tune.  Also, the chanting/singing and bubbling percussion of “Summer Relief” contrasts so well with the tune’s straight-ahead jazz melody, I wish the recording had more of the African/Cuban influence evident on this tune.  But “Today’s Opinion” provides a host of musical pleasures, and it suggests that Yosvany Terry is in the top echelon of jazz alto saxophonists playing today.
Posted by Paul Hrycaj at 9:56 AM