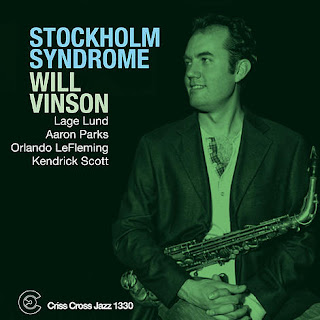 Stockholm Syndrome begins with “Squeeze,” a classic-sounding post-bop tune written by Vinson.  Though the alto sax is Vinson’s stronger instrument (to my ear), he chooses to begin his recording with the soprano.  The tune is very good, pretty and mid-tempo, with Vinson in unison with guitarist Lage Lund.  After a statement of the melody, pianist Aaron Parks begins the improvising with a tasteful, thoughtful solo, continuing in the Brad Mehldau/Keith Jarrett vein he displayed on the previously-reviewed Today is Tomorrow (by Dayna Stephens).  Then, after a brief Vinson/Lund improvised duet, Vinson takes the spotlight, making a strong statement with clean, fast lines adding up to an elegant solo.
The recording continues with another good Vinson tune, “Dear Old Stockholm Syndrome.”  Vinson is on alto here; he has a clean sound and plays adroit lines with a light touch, gliding from the bottom of the horn to the altissimo.  To my ear, he has a fairly traditional approach, like Jim Snidero’s, but with a bit more assertiveness and technical proficiency.  Then Parks comes in and plays a well-controlled, slightly funky solo.  Next is “Late Lament,” a pretty ballad by Paul Desmond.  Lund starts off the soloing with some classic-sounding jazz guitar ballad playing Desmond probably would have approved of.  Vinson then plays a logical but pretty solo on alto.  He displays a lot of imagination in his playing, but also a lot of self-control, never letting his imagination and formidable technique get out of hand.  Desmond would have probably approved of Vinson’s gentle closing cadenza as well.
“Dean Street Rundown” is an upper mid-tempo tune by Vinson.  Parks solos against some excellent, lively background provided by drummer Kendrick Scott.  Lund is very good in the background, too, his lush guitar almost sounding like a synthesizer.  Parks plays a good solo, but he keeps the intensity level too static.  (Unfortunately, I find this to be true of a number of Parks’s solos here.)  Vinson has a good workout on alto, with mainly bass and drums for accompaniment, again sounding like Jim Snidero on steroids.  Vinson’s upper mid-tempo “Icronic” has him again on soprano sax, playing a hard-swinging solo.  Lund then takes over, with the rhythm section swinging hard behind him.  Scott then plays a nice, light-hearted solo, and Vinson and Lund then play the melody in unison to the end.  Lund starts out the ballad “You Wouldn’t Forget Me” (by Fritz Spielman, from the 1953 movie “The Torch Song”) with some unaccompanied acoustic guitar strumming.  Vinson joins him, and it stays just the two of them to slowly play through the pretty melody.
Next up is Cole Porter’s “Everything I Love.”  After Vinson briskly reads through the melody, Parks and bassist Orlando Le Fleming trade a few choruses, with Scott showing off some impressive drumming.  Then Vinson gives a lesson in how to swing on a standard on the alto sax.  The cut finishes with Scott and Lund trading fours.  Lund’s attractive composition, “Party of One,” is a change of pace.  It begins with Vinson and the guitarist in unison, and then Vinson solos with barely-there accompaniment from the rhythm players.  The dreamy playing here seems more appropriate for an ECM recording, and, after an understated solo by Le Fleming, Lund carries on this dreamy quality in his solo.
The recording finishes with Bill Evans’s “Show Type Tune” (which reminds me a bit of the standard “It Could Happen to You”).  Le Fleming and Lund both lay out here, which gives the group a lighter feel, though Parks and Scott still produce a solid, mid-tempo groove.  After strong solos from Vinson and Parks, the players trade fours, with Scott showing off some precise brush work.  The tune ends with a lovely little closing phrase from Parks.
Though the players are young, brimming with ability, and full of fresh ideas, Stockholm Syndrome comes across mainly as traditional post-bop jazz.  Vinson is an exceptional saxophonist; his phrasing exhibits outstanding imagination and technique.  His writing is very strong as well, almost as good as his playing.  But I look forward to hearing Vinson play in a less traditional context; as good as Stockholm Syndrome is, its tradition-bound setting seems to constrain Vinson’s talents.
Posted by Paul Hrycaj at 9:55 AM