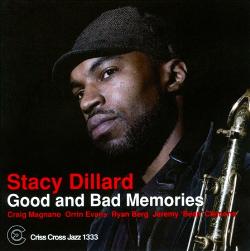 Good and Bad Memories starts off with a tune by drummer Jeremy Clemons; “Pleasant” is a no-nonsense, pretty, post-bop tune, with Dillard (on tenor sax) playing the melody in unison with guitarist Craig Magnano.  Pianist Orrin Evans solos first with a solid, straightforward effort.  Then Magnano solos, employing a tone and style similar to George Benson’s; he constructs his solo mainly out of clean, single-note runs.  When Dillard takes over, one is immediately struck by his sound, which is more muscular and dense than the tenor players previously reviewed here, such as J.D. Allen, Noah Preminger, and Dayna Stephens.  Dillard’s style also comes off as less “cerebral” than those players; he seems to play more from the gut and the heart than the head.
The next four tunes are Dillard’s.  On “Can’t Shake It,” Dillard has his only outing on soprano sax, and his sound on this horn is much like that of his tenor, strong and dense.  (For what it’s worth, Dillard uses Lebayle metal mouthpieces on both soprano and tenor, according to his website.)   This is an engaging, mid-tempo, minor-key tune.  Magnano in his solo employs a metallic and distorted sound, similar to Pat Metheny’s guitar-synthesizer, and his phrasing is edgier as well.  He does a good job gradually building up the excitement in his solo, with enthusiastic support from Clemons.  Dillard’s solo is lyrical and emotionally direct.  “Over and Over” is an upper mid-tempo tune, and bassist Ryan Berg plays a brief, flowing solo.  Magnano lays out for this tune, giving the group a lighter, sharper feel.  “There’s No Need” is a slower, reflective song with a loose time that eventually acquires a waltz-like feel.  Evans plays an introspective, chord-laden solo, which develops into a series of fast, Chick Corea-ish runs.  Dillard plays a solid, laid-back solo.  “Stizzozo” is uptempo and sounds a bit like a pop tune.  Dillard’s solo is good, but he occasionally seems to lose control over his phrases, like he’s not entirely sure where they’re going.
Berg’s “PCH” is a pretty song that sounds somewhat like an uptempo version of Coltrane’s “Naima.”  Berg begins the solos, his playing lyrical and ear-catching.  Magnano then solos, again playing in his George Benson mode.  The cut ends well with some clever pauses inserted into the melody.  “West Lexington” is another tune by Clemons.  It sounds like a song from an old detective movie set in a big city, with a dreamy, urban feel.  Evans takes over with a solo that fits perfectly the reflective, melancholy mood of the tune.  The recording ends with J.D, Allen’s “Mean Bean,” an up-tempo, bop-type tune that has a “Salt Peanuts” feel to it, with Dillard and Magnano in unison on the melody.  Dillard plays one of his better solos here, just letting loose with a series of solid phrases over the fast-moving changes
Based on Good and Bad Memories, Dillard clearly puts a premium on the emotional and lyrical qualities of his music, and his tunes and fellow musicians support these qualities.  But on this recording his playing sometimes strikes me as a bit careless and lacking in sophistication and precise technique, as great as his sound is.  OK, then I listened to Dillard’s Elite State of Mind, and I got a very different impression of his playing. On Elite State of Mind, Dillard still has his powerhouse tone, but his improvising is much more focused and relaxed.  The recording starts out with “Saturdays,” a Woody Shaw-ish Coltrane-ish type tune, and Dillard plays a solo that is stronger than any of his solos on Good and Bad Memories.  His improvising here is more relaxed and soulful, involving long, confident lines.  A second sax player solos after Dillard, and though his sound isn’t as strong as Dillard’s, his improvising is smart and engaging.  (I’m not sure, but I think it’s J.D. Allen.)  Good solos by pianist Ryan Weaver and bassist Ryan Berg follow.  The tune “Elite State of Mind” also has a touch of Naima.  (I assume Dillard wrote most of the tunes, though I’m not sure; it was hard to find info on this recording.)  Weaver plays a solo very much in the mode of McCoy Tyner.  On “Jonesville,” Craig Magnano plays a funky and fast solo.  “Beans and Cornbread” has a slightly Middle Eastern tinge to its melody.  The first sax soloist is not Dillard (Allen, again?), but the solo is very good.
“The Rise and Set” has a long Dillard solo, but it builds so well and is so engaging that it seems brief.  Weaver gets off a relaxed and clever solo.  Next up is J.D. Allen’s “Mean Bean,” which is also on Good and Bad Memories.  Here it’s just a blowing tune, and, with Weaver laying out, Dillard gets off a fast, furious, and clever solo over bass and drums.  The 2nd sax player--again, I assume it’s Allen--plays a solo that is very similar to Dillard’s (!), more aggressive and in-your-face than Allen’s playing usually is.  Weaver plays an excellent, flashy solo; he sounds here like Helen Sung (briefly noted in our earlier review of Tineke Postma).  The last tune, “We Need Love,” is something of a loose jam session, starting out with some free-form playing from bass and drums, and then what sounds like two wood flutes join in.  Dillard’s solos in extreme Coltrane mode here (it almost seems like he switched mouthpieces to get a more Coltrane-esque sound).  The playing here is a bit chaotic, though in a good way, and it’s over before you know it.
Dillard seems to have an affinity for jazz of the 60’s and 70’s, along the lines of John Coltrane’s A Love Supreme, Woody Shaw’s music, Horace Silver’s music, etc.  His playing is more emotional and aggressive than the other tenor players we’ve reviewed here (like J.D. Allen, Noah Preminger, and Dayna Stephens).  The music on Elite State of Mind is delightful; in the world of the more intellectual and controlled playing of saxophonists like Allen, Preminger, Binney, Stephens, etc., Dillard’s approach is a breath of fresh air.  For some wonderful, quasi-retro jazz, with terrific improvising from Dillard, check out Elite State of Mind.  Good & Bad Memories is a solid, and more polished, recording than Elite State of Mind, but Dillard’s playing is just not up to the level it is on Elite.  (Was he nervous that it’s his first Criss Cross recording?  Uncomfortable with the format?)  I hope Dillard puts out more recordings along the lines of Elite State of Mind; I’d wait in line for those.
Posted by Paul Hrycaj at 11:49 AM