Jon Irabagon is the winner of the 2008 Thelonious Monk International Jazz competition, so I’ve been interested in hearing him play for a while.  “Foxy” is my first exposure to his work. 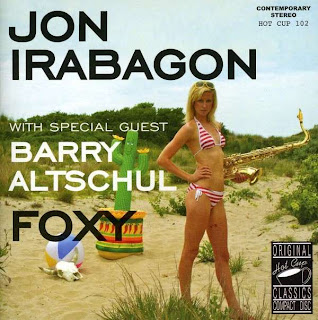 This recording is really something else.  I don’t think I’ve ever heard anything quite like it.  It is 78 minutes of Irabagon playing unrelenting, high intensity tenor saxophone with backing from his trio mates, Barry Altschul on drums and Peter Brendler on bass.  The recording appears to be made up of 12 cuts, but it is really an uninterrupted 78 minutes of playing by the trio.  How one “cut” is distinguished from the next is not entirely clear.  It could be argued that there are subtle shifts in theme in Irabagon’s relentless playing that distinguish one cut from the next, but if so, these are hard to identify.  For the most part, there is a lot of sameness throughout the entire recording, Altschul paying intensely with a lot of splashy cymbals, Brendler keeping a steady bass pulse, and Irabagon playing fast and furious phrases over the background rhythm.  Having said this, I’ll still try to say a bit about each cut.
The recording begins with “Foxy,” and the music actually fades in, so the recording begins after the trio had already been playing for a while.  The tune is upper mid-tempo, with Altschul banging away pretty hard at the drums and Irabagon matching him with hard and fast phrases on the tenor.  Though this is the beginning of the recording, it sounds like we’re catching the trio at the climactic point of the last chorus of a long tenor sax solo.  Irabagon has a strong, fluid, clear-as-a-bell sound throughout the entire range of the horn.  This recording clearly refers to the trio work of Sonny Rollins, with a CD cover that’s a play on the cover of Rollins’s “Way Out West,” and the title of each cut apparently a play on Rollins’s “Doxy.”  Irabagon seems to have an endless arsenal of ideas, some really great, some just ok, but they just keep coming.  Irabagon also slips in some references to the jazz lexicon, though there are some references I couldn’t quite place and others I probably missed entirely.
“Proxy” begins with Irabagon playing a brief phrase full of false fingering and trilling, which he then plays repeatedly.  After a couple of minutes of this, he goes back into more conventional jazz phrasing (including a reference to “I Got Rhythm”), though at a slightly slower tempo than “Foxy,” and occasionally he brings back the original false-fingering phrase.  “Chicken Poxy” has another reference to “I Got Rhythm,” and Irabagon’s phrasing here is a bit choppier than it has been.  This tune is also a bit slower and more bluesy than what we’ve heard so far.  “Boxy” is even more bluesy, and Altschul turns down the volume a bit on his usual forceful playing.  Irabagon spends a lot of time working with an ascending phrase, though he modifies it somewhat.  On “Hydroxy,” Irabagon starts with some wide interval leaps, from low to high, and the trio goes into a section that has the character of a brisk, bop-type tune.  “Biloxi” starts with another false-fingered phrase that Irabagon works on for a good long time and eventually carries into the horn’s upper register.
“Tsetse” begins with a cascading descending phrase from Irabagon that he uses as a recurring motif.  On this cut, there is more give and take between the saxophonist and the rhythm players, and this more reflective approach is a nice change of pace.  “Unorthodoxy” actually starts out like a more conventional tune, with Altschul again turning his volume down.  Irabagon has some of his most interesting playing here.  On “Epoxy,” Irabagon works with an ascending phrase that abruptly drops to a note in the low register.  He continues his fine playing here, crooning on his horn for a while before returning to his high energy riffs, even throwing in a reference to “Let It Snow.”  This is a long cut, but one of the better ones, with Irabagon in a good groove throughout.
Then comes the unfortunate “Roxy.”  This cut begins with Charlie Parker’s “Now’s the Time,” and Irabagon grabs a three-note phrase from this tune and repeats it, without any real variation, for over six minutes!  This just doesn’t work for me.  A few minutes into this cut and you’re beginning to think of it less as music and more as conceptual art.  “Foxy (radio cut)” goes back to Irabagon’s more conventional playing, beginning with a nice relaxed groove and moving into an up-tempo romp.  This cut moves right into the last one, “Moxie,” and Irabagon’s playing here is especially virtuosic, gruff and swinging.  Then the cut, and the recording, abruptly end, as though someone just cut the power off.
The unconventional nature of this recording invites some speculation about what Irabagon was trying to accomplish.  To my mind, considering the performance’s consistency of intensity, tempo, and particular harmonic structure, and the cut titles that are a play on “Doxy,” this entire recording is a 78-minute improvisation based on Sonny Rollins’s “Doxy”; if you focus, it’s always there in the background.  Irabagon’s playing around with the beginning and end of the recording, from the beginning fade-in to the abrupt close, also invites speculation.  Is he slyly suggesting that a good jazz player could take a workhorse tune like “Doxy” and play on it endlessly, this particular performance just a slice of one that is in fact endless?  I wish the recording had faded out the way it faded in, giving the sense of a musical Mobius strip, finite but with no beginning and no end, particularly since the approach on the last cut is so similar to that of the first.  In any case, I hope Irabagon intended with Foxy to spark this kind of musing.  At the very least, Foxy is a remarkable performance, showcasing Irabagon’s considerable creativity, imagination, and virtuosity, though, due to its relentless intensity and lack of variety, it isn’t an “easy” listening experience (and it is marred by the intolerably repetitious “Roxy”).  I look forward to hearing Irabagon employ his tremendous musical talents in more orthodox contexts.

On Edit: If you want to get some idea of Jon Irabagon's playing, here's a video clip of him playing Wayne Shorter's "Yes or No" (a great tune).  Take a couple of minutes of Irabagon's more intense playing here, imagine it stretched out over 78 minutes, and you get a fair idea of what Foxy is about.