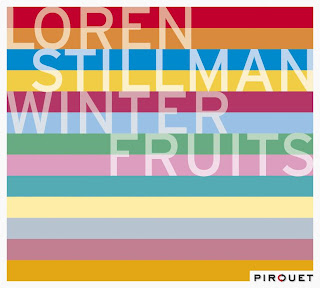 The recording starts out with “Muted Dreams,” a slow, pretty tune. Stillman has a sweet, dry-as-paper, understated tone on alto sax (his only instrument on this recording). He improvises with fast, slippery, ear-catching lines. This fine first cut ends with some good interplay between the musicians, including Gary Versace on organ, Nate Radley on guitar, and Ted Poor on drums. On “Skin,” Versace plays an interesting but tentative solo; Stillman’s solo is more assertive. Then Radley comes in; he plays with a strong sound, improvising with clear, lyrical, single-note lines, sounding surprisingly traditional. Poor shows off some nice cymbal work while Stillman and Radley play in unison. Stillman finishes the tune with somewhat more free-wheeling improvising.
“Men of Mystery” is a slow, abstract tune, starting with Radley and Versace in unison.  Stillman then comes in with some appropriately abstract improvising, showing his command of the entire horn.  The tune goes through some transitions, like a mini-suite, and then ends quietly.  “With You” has a subtle melody, and Versace plays an understated and somewhat disorderly solo.  Radley is a bit stronger in his brief solo, as is Stillman.  Poor maintains a light touch throughout, and the whole cut seems to lack cohesion.  On “Like a Magic Kiss,” Stillman and Radley are in unison again.  Radley has another strong, linear solo with some speedy lines, which lights some fire in Poor’s playing.  Stillman also plays a good solo, again freely ranging all over the alto.  Though the halting melody of the tune isn’t very effective, the soloing here is some of the best on the recording.
“A Song to Be Played” starts with Versace musing at the organ, and then Stillman and Radley enter in unison on a slow and gentle melody.  Their playing is an intro to Poor taking the spotlight, where he also sounds like he’s musing at his drum set.  There are no other solos on this cut.  The tune “Winter Fruits,” which I expected to be a melancholy meditation, turns out to have a percussive melody, and Poor plays with more drive than usual.  Stillman plays a disjointed, Steve Coleman-ish solo, adding some wild runs and altissimo screaming.  This good performance is too brief, though.  The recording ends with “Puffy,” a pretty tune with Radley and Stillman again in unison on the melody.  Stillman’s playing comes off as a little precious here, and the tune comes to a quiet close.
Winter Fruits is a nice recording, but overall it doesn’t seem to be entirely successful.  The tunes are ok, the musicians are clearly strong players, and the soloing is generally good (particularly from Stillman and Radley), but, oddly, the whole seems less than the sum of its parts.  The performances overall lack drive and cohesion, and even though there’s a lot of variety within the tunes (like changes in tempo and texture), it doesn’t seem to add up to much.  This is partly the result of Poor’s light touch on drums, which probably was intentional but leaves the recording a bit lethargic.  Also, though Stillman has variety within his tunes, the recording would have benefitted from more variety in the tunes themselves, like a couple that were more up-tempo and energetic (like “Winter Fruits”).  In any case, though this recording doesn’t strike me as a complete success, Stillman’s playing is interesting and high-level, and I’m sure I’ll give him another listen before long.
Posted by Paul Hrycaj at 9:53 AM