On the cut, “Himorme,” on Walter Smith III’s recording, III (previously reviewed here), alto saxophonist Logan Richardson makes a strong guest appearance.  I’d never heard a full-length recording of Richardson’s before, so I decided that his 2009 recording, Ethos, would be our next one to review. 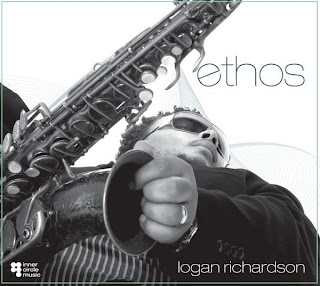 Ethos starts out with “Soundtrack.”  Immediately apparent on this tune, besides its prettiness, is Richardson’s unusual choice of instrumentation, which includes vibes, cello, guitar, and a vocalist who adds tones without lyrics.  Richardson’s solos over a background laid down by those players.  Richardson’s sound here is more assertive than it is in his performance on III.  His sound is basically softly rounded but he has a nice edge to it (more so than, say, Jaleel Shaw), and his phrasing is very thoughtful but still soulful; you get the sense that he’s constantly thinking while playing, developing and changing up his lines.  The tune changes direction after the alto solo, and vibist Mike Pinto plays a good solo with enthusiastic support from drummer Tommy Crane.
“Dissolving Resolution of Childhood” is a gentle tune that Richardson plays in unison with vocalist Colin Killalea, though he breaks off to improvise against the repeated melody.  Guitarist Gregg Ruggiero adds his own thoughtful, careful lines in a solo that fits the tune perfectly.  “In Searching” has Richardson showing his more aggressive and wild side, playing some harsh and fast lines in a trio with Crane and bassist Chris Tordini.  “Plugged In” has alto, voice, and vibes together playing a repetitive melody line, basically an ostinato.  Richardson solos against this, as does Ruggiero, though very briefly.
“Faith” slows things down, with Richardson playing a slow melody and with Patrick Petty’s cello and Tordini’s melodic bass both playing prominent roles.  Richardson displays more emotion than usual on this solo.  “Vaal” is an ethereal duet between vibist Pinto and Richardson, with Pinto moving into a repetitive figure behind Richardson’s slippery improvised lines.  After Richardson quietly ends his solo, Pinto improvises by himself, but only briefly before Richardson comes back to close with the melody.  “Thin Line” has a slight Spanish tint, which the rhythm section holds while Ruggiero plays a much-too-brief solo, before Richardson again takes the spotlight.  Pinto then solos, also too briefly.  The tune changes up a bit with a guitar and bass ostinato while drummer Crane plays a solid but brief (are we seeing a pattern here?) solo.
“Prelude to Wanting” is a solemn, brief melody focusing on alto, cello, voice, and guitar, with no improvising.  “Wanting” has a stately theme, repeated by voice and guitar as a background to Richardson’s swirling lines (including some crisp activity from Crane on drums).  “Tricky” has Richardson again showing off what he can do on a speedy tune with accompaniment of just bass and drums.  “Chance” is another placid duet between Richardson and Pinto.  “Open Doors” is a more straight-ahead tune (after a free-form intro), with first Pinto and then Ruggiero playing solid solos.  Then Richardson contributes an aggressive, gritty solo.
“Philanthropic Landscapes” begins like a chamber piece, with vibes, cello, and wordless vocals, to which Richardson adds his improvising.  Richardson’s alto comes off as emotional, soaring, and a little bluesy, a nice contrast to the gentle, drum-less background--maybe his strongest playing on the recording.  “Isometric” is a third duet between Richardson and Pinto; they make a good team, with Richardson taking full advantage of Pinto’s sensitive backup.  The recording closes with the quiet, mid-tempo “Pathos,” on which the entire group contributes.  Richardson plays another aggressive, free-ranging solo against the gentle background cushion of voice, vibes, and guitar, with the proceedings ending quickly and without fanfare.
Ethos is an excellent recording, coming off a bit like the previously reviewed Barefooted Town, by David Binney.  Like Binney’s recording, Ethos has strong compositions (all by Richardson except for Pinto’s “Vaal”) and an unusual choice of instrumentation.  The vibes, cello, guitar, and wordless vocals give a very light feeling to the music, which also must be due to Tordini’s and Crane’s light rhythmic touch.  Richardson’s aggressive, gritty, and slightly astringent playing contrasts well with this backdrop, though because of the basic lightness of the alto sax, it is never overbearing.  Richardson is an excellent alto player, whose playing is always thoughtful and interesting.  The title of his previous recording, Cerebral Flow, describes his playing accurately, as well as the general character of the music on Ethos.  The only complaints I have are related: some of the cuts are too brief and underdeveloped, and Richardson is a bit of a solo hog; the solos of his more-than-competent comrades are frustratingly brief and too infrequent.  Having said that, it’s hard to complain about Richardson hogging the spotlight when his playing is so good.  But this recording would have been even better with fewer tunes and longer and more solos from the supporting cast.
Posted by Paul Hrycaj at 7:44 AM