Review: Before the Rain – Noah Preminger 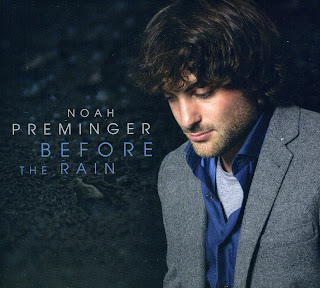 The recording starts out with “Where or when,” an old and pretty tune by Rodgers and Hart.  The tune starts out as a slow duet between Preminger and pianist Frank Kimbrough, with bassist John Hebert and drummer Matt Wilson delicately joining in.  This is just a brief tune, and Preminger improvises with a breathy, dry, world-weary tone.   (The music at this point reminds me of Chico Freeman’s 1979 album, Spirit Sensitive.)  The recording picks up some steam with “Quickening,” a tune by Kimbrough with a Monk-like melody.  Preminger’s style has a light, ghostly quality, like he’s looking at you from around a corner.  Kimbrough carries the tune on with a good solo, very Keith Jarrett-ish.  (I was expecting to hear some of Jarrett’s trademark moans at some point.)  Wilson and Hebert are very active behind Kimbrough, almost like all three are co-soloing.  Hebert then plays an excellent solo, virtuosic and full of musical interest, with Wilson accompanying him.
“Before the Rain” is a slow, contemplative tune, almost like a tone poem.  Its quiet, melancholy quality makes it feel more like “during the rain.”  (This music would be perfect to listen to looking out a window during a gentle autumn rainfall.)  Preminger uses his horn here like a paintbrush, mixing in occasional altissimo notes and swirling, John Klemmer-ish runs.  Kimbrough then plays a subtle, barely-there solo, with excellent accompaniment from Hebert and Wilson.  “Abreaction” has a slow, tentative melody contrasting with kinetic drumming from Wilson.  Preminger’s solo is more linear than usual, with good lines over the range of the horn against bass and drums.  Kimbrough plays an imposing, chord-laden solo against more strong work from Hebert and Wilson.  With Hebert on arco bass, Wilson plays a solo against a steady melody from bass, sax, and piano.  The music here, as on much of the recording, has a precise, understated feel of a recital hall performance.
“Until the Real Thing Comes Along” is a straightforward, old fashioned ballad.  Preminger plays a sneaky, subtle solo here, with skillful swoops into the altissimo register.  His tentative sound and note-bending recalls Coltrane’s ballad playing.  His idiosyncratic solo style contrasts well with the old-fashioned melody, and I wish he had played longer here.  “K” has Wilson playing a fast tempo while the rest of the group plays a slow, dirge-like melody.  It’s an interesting effect but doesn’t do much for me.  There’s no improvising in this little interlude.  Ornette Coleman’s “Toy Dance” is a snatch of a quick melody, which leads right into Preminger’s solo.  Preminger mixes in spurts of melody here and there with nice, longer lines, including some sharp forays into the altissimo register.  Kimbrough plays a disjointed, loose solo, with more amazing background from Wilson and Hebert.
“November” slows things down to mid-tempo with another melancholy, rainy-day melody.  Preminger plays phrases like he’s casually flinging paint on a canvas.  Kimbrough plays an elegant solo.  The recording ends with “Jamie,” a slow ballad, with Preminger playing softly, and the musicians’ gentle playing sounding like they’re ready to call it quits after a long, successful night on the bandstand.
Before the Rain is a fine recording, with Preminger and Kimbrough being the primary soloists.  Preminger has a very subtle style.  Though he sounds like he can do pretty much whatever he wants on the saxophone, his sound is tentative and thoughtful, almost shy (unlike most tenor players), like the notes are reluctant to leave the instrument.  Kimbrough is also very subtle on this recording, maybe too much so.  Hebert and Wilson play wonderfully in their roles as accompanists, though I wish they had more solo time.  Preminger may choose to play in a more driving style at other times, but this mostly slow, melancholy recording suits his style very well and makes me want to hear more of his playing in the future.
Posted by Paul Hrycaj at 9:32 AM