I caught a performance by Dutch saxophonist Tineke Postma with her quartet in my current home town of Baton Rouge, LA, a few months ago.  I was so impressed that I picked up a copy of her CD, The Dawn of Light, after the concert.  Postma played well that night and had some great musicians accompanying her, particularly Helen Sung on piano.  As good as Postma was, Sung knocked out the audience with her pyrotechnics on piano.  I had hoped that Sung was going to be on Dawn of Light, but, alas, it was a totally different group from the one I heard.  Anyway, I somehow neglected this CD, and I’ve finally gotten around to giving Dawn of Light a listen. 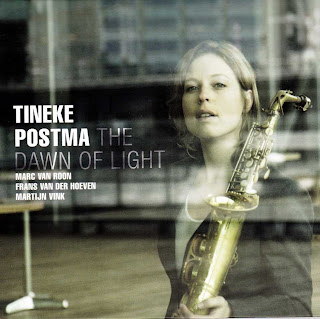 The CD begins with “Cancao de Amor,” by Heitor Villa Lobos.  Postma is accompanied by Marc van Roon on acoustic and electric piano, Frans van der Hoeven on acoustic bass, and Martijn Vink on drums.  One thing I can say for sure, Postma knows how to pick musicians.  Though I’ve never heard of these musicians, they were all excellent (just like the ones I heard at her live concert).  On the opening cut, van der Hoeven and Vink play some burning accompaniment behind van Roon and Postma.  Postma’s sound on the alto sax is distinctive; dry and breathy, like her reed is too hard, but still sweet and having a slightly classical feel.  It’s a sound that works well for her.  Postma favors an impressionistic style of phrasing, using her horn like a paintbrush, playing swirling, spiraling phrases in a way that strikes me as restless or skittish, with less emphasis on swing.  It’s a very different style from the saxophonists we’ve reviewed on All Jazz Sax so far.


On her composition, “Falling Scales,” Postma is again on alto, playing the slightly ominous, Monk-like melody in unison with van Roon.  Postma solos with more of her swirling phrases, and van Roon plays a partly Monk-ish, partly Chick Corea-ish solo.  “Before the Snow” is a slow ballad, with a melody somewhat like the jazz standard, “Laura,” by David Raskin.  “Leave Me a Place Underground” has a nice groove and includes a vocal by Esperanza Spalding, singing a poem by Pablo Neruda.  I’ll confess that I’m not much of a fan of vocal jazz, but Spalding sounds great on this cut, doing some wordless vocal improvising after singing the melody.  (Postma does a great job putting the words to her music.)  Postma plays a nice solo against the groove, picking up the soprano sax for the first time on the recording.  This cut is one of the most cohesive and effective on the album; I wish they had done more cuts like this with Spalding.
Postma plays soprano again on “The Observer.”  Like most of the tunes on this recording, the rhythm section leaves a lot of space for Postma to play in; Postma seems to favor an open, loose rhythm backdrop in her tunes.  This cut features some especially nice interplay between the musicians during the piano solo (within which van Roon sprinkles a little synthesizer and electric piano).  On Monk’s “Off Minor,” Postma and van Roon play a duet, with Postma back on alto.  Postma’s quasi-classical style of playing comes out strongly here, the music sounding almost like a performance in a recital hall.  Van Roon does a nice job in his solo with no accompaniment.
Van Roon’s “Newland” is a slowly flowing tune, with Postma back on soprano.  Postma’s “Man Who Stared at Coats” has a more straightforward groove and solo from the leader on alto.  Vink plays a nice, though too brief, solo on drums.  Van Roon’s “Beyond Category” has an abstract, disjointed melody with the groove all over the place, even including a slightly rock-ish section.  Van Roon solos on electric piano here.  The recording ends with Postma’s “Tell It Like It Is” (not the Aaron Neville song).  Postma solos both on alto and soprano on this cut, and bassist van der Hoeven plays a nice solo.
As noted, Postma likes a loose feel on her tunes, and she changes tempo and groove regularly within a tune.  This gives her music a lot of variation; she almost never just locks into a groove and stays with it for the duration.  For my ear, though, I prefer when she plays on a more straightforward groove when she solos, like on “Leave Me a Place Underground” and “Man Who Stared at Coats.”  Her music has a hard-to-pin-down feel, which leaves me a bit sonically off balance.  I also wish she had given her fine bass player and drummer more solo time.  This recording comes off a bit like the Sabbagh-and-Demoulin show noted in the previous review of Jerome Sabbagh’s “Plugged In,” though Postma’s bassist and drummer certainly have a more active background role than the rhythm players on “Plugged In.”  But “Dawn of Light” is definitely a nice change of pace compared to the more straightforward jazz recordings we’ve reviewed so far, and Postma is a very skilled player on both alto and soprano.  I’ll be keeping an ear open for Postma’s future recordings.
Posted by Paul Hrycaj at 9:16 AM