Jaleel Shaw has been in the back of my mind for a while.  I’ve heard him play before on a Roy Haynes recording.  Then I recently saw an approving reference to his playing in the New York Times.  That was enough (it doesn’t take much) to get me to give a listen to his most recent recording, Optimism. 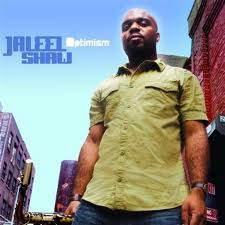 “Flipside” is an up-tempo, hard bop style tune, with Shaw and guitarist Lage Lund in unison on the brisk melody.  Shaw has a clean, pretty sound on alto sax (he only plays alto on this recording) without much of an edge, and his phrasing is linear and straightforward.  During his solo, the rhythm section (Robert Glasper on piano, Joe Martin on bass, and Jonathan Blake on drums) is doing all kinds of stuff; Shaw’s phrasing is the most stable thing happening.  Glasper then solos with a series of disjointed lines.  This is the first I’ve heard of Glasper, and his solos are full of variety; he‘s got all kinds of aural tricks up his sleeve, and he uses them liberally.  Then Blake plays a good solo and Lund improvises as the tune fades out.


“Almost” is a slow tune that shines the spotlight on bassist Martin, who solos while Shaw and Lund walk through the melody.  No one else solos here but Martin.  “In 3” is a subtle jazz waltz.  Lund solos with a combination of off-center lines and chords, a good mix.  Shaw plays a thoughtful, well-paced solo at the climax of which he mixes in some emotional altissimo screaming (which seems to be a rare device for him).  “Optimism” is a pretty, upper mid-tempo tune, with Glasper on electric piano and Shaw and Lund again in unison on the melody.  Glasper plays an energetic, ear-catching solo, again with a lot of variety, and Blake responds accordingly with some crisp accompaniment.  Shaw plays a solid solo but without much development.  Blake then plays a shimmering solo with Glasper accompanying him with some rock steady chords.


“If I’m Lucky” is an old, pretty song (DeLang & Myrow), and Shaw gives a fine reading of the melody.  This cut is basically a showcase for Lund and Martin.  Martin’s solo isn’t flashy but it’s tasteful.  Lund’s solo is brief but effective.  Shaw doesn’t improvise on this one.  “Flight” has a funky beat and a spacy melody.  Not much happens here except for a brief Glasper solo.  Then comes another old song, “Love for Sale.”  Frequently when I hear this tune, I’m struck by how flexible it is and how good it is for improvising.  (I was reminded of one fairly recent version done by Walt Weiskopf on his excellent CD Anytown; he does some of his best playing on the CD on that tune.)  On this one, trumpeter Jeremy Pelt finally makes an appearance.  I’m not familiar with Pelt (I got a lot of bang for my buck with this CD as far as first time hearings).  His phrasing reminds me of Freddie Hubbard; he displays an inventiveness and clarity that’s similar to Hubbard’s, though his sound isn’t quite as bright.  Pelt and Shaw complement each other well; Pelt adds some spice to the mix and Shaw cools things down a bit.


“Muna’s Sleeping” is a pretty lullaby, with a melody a bit like “Naima.”  Glasper show great musicality in his solo here.  As great as his chops are, at one point in his solo, he simply repeats a note a few times, and it sounds like just the right thing to do.  The rest of the cut includes impressionistic playing from all the musicians, including some slightly distorted guitar from Lund.  “Muna’s Dream” is an interesting departure from the rest of the CD.  Glasper and Lund play a spacy background and the whole cut stays almost at the level of ambient (but good) music.


“The Struggle” is a return to more straight-ahead music, with Lund and Shaw in unison again playing a Coltrane-ish melody.  Shaw solos in a Coltrane-ish mode as well, with more of an edge in his sound and phrasing, sounding a bit like Kenny Garrett.  Glasper seems to respond to this change in Shaw’s approach with enthusiastic accompaniment.  Lund plays a solo with skittish phrasing and some interesting echo effects.  Glasper again lets loose with a multifaceted solo, first spacy and modernish, then down home and bluesy.  The musicians really stretch out on this one, the longest cut of the recording (at 12 minutes).  “Optitude” is a brief coda of a tune (at just 2 minutes), which includes Pelt again—a nice, low-key way to close the recording.


On Optimism, Jaleel Shaw shows himself to be a very solid alto saxophonist and composer (all of the tunes are his except for the two standards).  To my ear, his sound lacks a sufficient edge and is a bit smallish, sounding almost like a soprano sax at times, though this sound works well for his straightforward phrasing.  I think Optimism displays some missed opportunities.  “The Struggle” works beautifully, indicating that the recording would have benefited from more tunes that included Pelt (he only plays on three cuts and solos on two) and that allowed the excellent musicians to stretch out more.  Because Shaw’s sound isn’t striking and his phrasing is a bit conventional, his music benefits from taking some chances, like on “Flight” and “Muna’s Dream,” but these cuts suffer from a lack of development.  I hope Shaw’s future recordings include more stretching out and risk-taking, which will take them from the level of very good to great.
Posted by Paul Hrycaj at 12:20 PM