Ambrose Akinmusire is this year’s winner of the DownBeat Critic’s Poll’s established trumpet player award, and he played beautifully on David Binney’s Barefooted Town, reviewed previously here on All Jazz Sax.  Akinmusire’s recording, When the Heart Emerges Glistening, has been much acclaimed, and the saxophonist on that recording is Walter Smith III.  Though I haven’t heard this recording (yet), the acclaim for it made me curious about Smith, so I decided his CD III would be next in our spotlight. 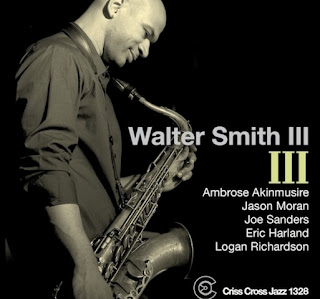 III starts out with “Working Title.”  Smith, appropriately, begins the tune playing by himself, giving us a good taste of his capabilities.  His tone is full with a touch of breathiness, a bit on the soft side, and is slightly old fashioned, in the manner of Ben Webster.  After his intro, he moves into an up-tempo post-bop melody, in unison with Ambrose Akinmusire.  Smith’s phrasing in his solo is a mixture of straight post-bop and controlled conflagration, somewhat like Joe Henderson, very mature sounding.  His solo evolves into rapid, well-executed runs.  Pianist Jason Moran and Akinmusire solo similarly, improvising with a mixture of tradition and ear-popping modernism.
“Capital Wasteland” is a quiet, mid-tempo tune.  Moran’s solo is contemplative and spare.  Smith’s solo starts out gently, with a good deal of emotion, and builds in intensity.  The rhythm section builds its intensity right with him, especially drummer Eric Harland.  Smith’s solo is expansive, presenting a well-developed narrative.  On “Highschoolish,” Moran lays out.  Smith sounds very comfortable in the trio setting.  This tune is a little like an up-tempo “In Your Own Sweet Way,” with the rhythm section playing double time.  Smith reminds me here of J.D. Allen on the previously reviewed trio recording, Victory!, though his playing is a bit more energetic than Allen’s.  Harland solos here with Smith playing an ostinato behind him.  On the basis of this cut, Smith would do well to do a full-length trio recording.
“Himorme” is a return to up-tempo post-bop.  Smith plays the intricate melody in unison with alto saxophonist Logan Richardson.  Richardson solos first, employing a smallish but strong, slightly breathy tone.  His improvised lines are angular, with a touch of Steve Coleman’s dissonant phrasing.  Moran plays a brief but good solo.  Smith’s solo is fast and furious.  “Aubade” is a pretty duet between Smith and Moran.  Their playing exhibits a connection similar to the near-telepathic one between Keith Jarrett and Jan Garbarek from their European Quartet days.
“Byus” has Smith back in unison with Akinmusire on an upper mid-tempo tune. Moran decides to play a lean solo here, staying close to the tune’s melody.  Akinmusire plays a good solo.  Then Smith comes in more laid back than usual, employing slippery phrasing, and then builds his solo into a well-rounded performance.  “Henya” is a slower, ¾ time tune.  Smith and Akinmusire trade improvised choruses, though this is more of a cooperative effort than a competition.  Moran plays a formal, composed-sounding solo, and the trumpet and tenor play the melody to close out the cut.  “Moranish” starts out, appropriately, with Moran by himself.  The melody of this tune is almost soulful, except for its off-center, Monk-ish rhythms.  Smith plays a loose, leisurely solo.  “Goodnight Now” closes the recording on a peaceful note, with Smith and the rhythm section all playing impressionistically, and bassist Joe Sanders stepping out more than usual.  Moran gently brings the performance, and the recording, to a close.
This recording could function as a job application for Smith, with the saxophonist establishing his credentials in a post-bop quintet context, in a trio setting, and in a duet with piano, at times displaying passion, sensitivity, and virtuosity, all with apparent ease.  The variety of the music and the maturity and relaxed confidence of the players make this recording approach the quality of classic recordings on Blue Note by the likes of Joe Henderson and Freddie Hubbard.  I’ll be watching closely for Smith’s future work.
Posted by Paul Hrycaj at 9:21 AM